A magnetic personality, an entrepreneur, a philanthropist, and a social activist bearing a will of iron and a heart of gold. Mrs Aruna Oswal has been working tirelessly to accomplish the dreams of numerous lives that she has touched over the years. ‘Finding your true happiness in the happiness of others’ is the belief she lives by.

Born in a simple family at Ambala (Punjab, India). She was blessed with loving parents who supported her various talents of dance, music, acting and nurtured her personality for all the endeavours in life. A Masters degree in Arts paved way for her further refinement and intellectual approach.

She is married to revered industrialist Mr. Abhey Oswal and is blessed with three wonderful children. A true humanitarian, she has touched numerous lives with her generosity, love and compassion.

One such instance is the seven fifty houses that she has built at Ludhiana to rehabilitate the widows of army officers. She was instrumental in planning, executing a mega project for the accommodation of 5000 devotees visiting Tirupati Balaji Temple known as Aruna Abhey Oswal Amenity Complex. Be it executing 100 bed hospital at Ahmednagar to serve the needy for free, or immediately initiating action to provide relief and rehabilitation to the flood affected areas of Orissa. Aruna oswal has truly been ‘ A CHANGE MAKER ’

To give her vision a completely new dimension she joined the International Lions club in 1989. In the year 1999-2000 she became the President of the club in Juhu ( Mumbai) ,being the only woman president till date, climbing rapidly the ladders of lionism, and in 2004-05 she became the District Governor of District 323 A3 ( The first woman to do so). As a lion her contributions include building blood banks, eye care foundations, community welfare centres, sight restoration programs etc. Apart from this she has established several orphanages, schools and medical centres for the benefit of tribal areas.

Her current offices for social work include 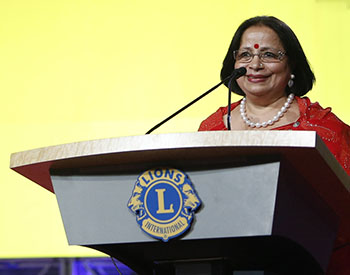 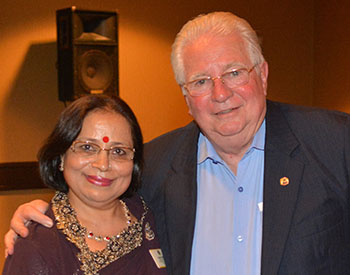 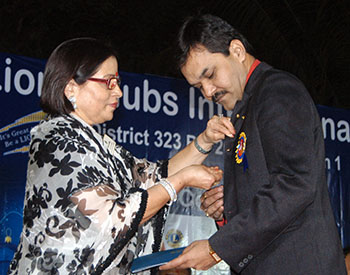 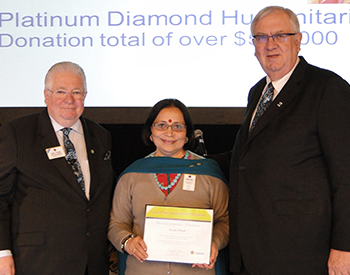